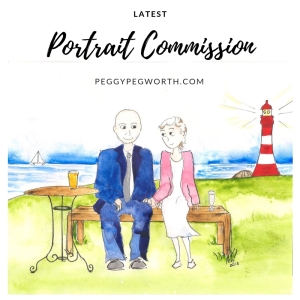 Are you looking for a creative anniversary gift idea?

Do you want to get away from the traditional anniversary gifts?

Wondering how to make this anniversary special?

A couple portrait could be just the wedding anniversary gift you are looking for!

Matt’s parents were approaching their golden wedding anniversary and so he wanted to give them a unique and unconventional gift. For many years his parents ran a hotel on Plymouth Hoe, so he wanted the Hoe park and Smeatons Tower lighthouse to feature in the portrait. Check out the video see how the initial sketches eventually became a vibrant cartoon portrait.

During the process Matt had to liaise with his brother and sister about ideas to include in the picture. This ensured that everyone was happy with the result. Matt said,

Super duper. Love it. Thanks for your hard work.

GET FREE PRINTABLE ART TO KEEP!

Words to Read (With Pictures)